“Art i Sa Barcelona” is located at the main entrance of “Plaça Reial”, next to “La Rambla” and in the heart of Gothic Quarter. It is a perfect place to begin or finish your visit to the neighbourhood. Plaça Reial, the royal square, is one of the most iconic squares in Barcelona with a very interesting history. Would you like to know it?

The famous Barcelona’s Ramblas are currently placed where back in the 13th Century  there was a stream which defined the limit of the first west defensive wall of Barcelona. A century later, Barcelona city has grown so much that a second wall had to be built. Consequently this stream was kept inside the two walls. At that moment the area between the two walls was an axis of low density with many convents and religious buildings with orchards, buildings and other dependencies. In the current “Plaça Reial” emplacement there was a big orchard called “Del Vidre” because previously there was a glass oven (in fact one of the limit streets of La Plaza Reial has this name “Del Vidre”).

In 1714, Felipe V ceded these lands to the Capuchins in compensation for the destructions that their troops had caused to their convents in the War of Succession. Thus it was that from 1718 to 1723 was built on this site the new convent of the Capuchins.

In the middle of the eighteenth century, with industrialisation, Barcelona completely changed the structure of its population, which grew and settled in the area between the first and second walls, which is now the Raval. The area of “La Rambla” went from being a peripheral area of the city to acquire a more central position. “La Rambla” become the new bourgeois promenade around which were located cafes, theatres, banks and hotels; this change the shape of many of the religious buildings, such as the Hospital of the Holy Cross Teatre which change into the “Teatre Principal”, or the College of the Franciscans into the “Hotel Oriente”. At this time the local government promoted internal reforms to rationalise the existing medieval Barcelona’s layout and to enhance the possibilities of edification.

Thus it was that the Cortes expropriated the new convent of the Capuchins and granted it to the Ajuntament de Barcelona, who from the first moment decided to use the land for the construction of a large square.
Several proposals were made for it, although the idea of a plaza with porches was always considered, the initial plan was to build a square that would cover both sides of “La Rambla” and named it  “Plaza de Los Heroes Españoles”. In this new square would be host the new building of the City Hall and would have patriotic allusions; with this idea in 1823, the convent of the Capuchins was demolished.

Later in the same year 1823, the absolute monarchy is reintroduced, and the lands were returned to the Capuchins, who quickly rebuild their convent. But on summer of 1836, popular revolts led to the assault and burning of many convents of the Rambla, the Capuchins Friars finally vacated the convent that returned again to the hands of the Barcelona City Council. The only thing left of it, is the name that “la Rambla” takes just where the convent was located.

After 15 years of the first project for this space, the City Council changed its mind. Given the demand for the theatre, the opera and the circus at that time, the space was refurbished into a theatre with 1600 seats, but in 1848 the initial idea of making a large square in these lands went back to life.

On May 1848, a tender was convened for the new design of the plaza, 11 projects were presented, and the winner was the project of Francesc Daniel y Molina

Works began in the late 1850s and were not completed until ten years later, even in 1864 the façades were being finished. The delays were partly due to changes in the original project. The initial ornamentation project of the square was a central equestrian figure of the royalty and gardens around it. The original design never came to an end and in 1876 was installed a fountain named “The Three Graces”. Finally,  in 1879, Antoni Gaudí’s lamps were installed (his first work for Barcelona’s city) and in 1883 palm trees were planted getting its present shape.

Since then Plaça Reial started to be the place were Barcelonians use to gather around and meet. It was a matter of time that first restaurants opened their doors, Canarias Cervecería was the first. Art i Sa, D’O Hotel and Ocaña has been the three last ones. We are very proud to be past of this beautiful square history. 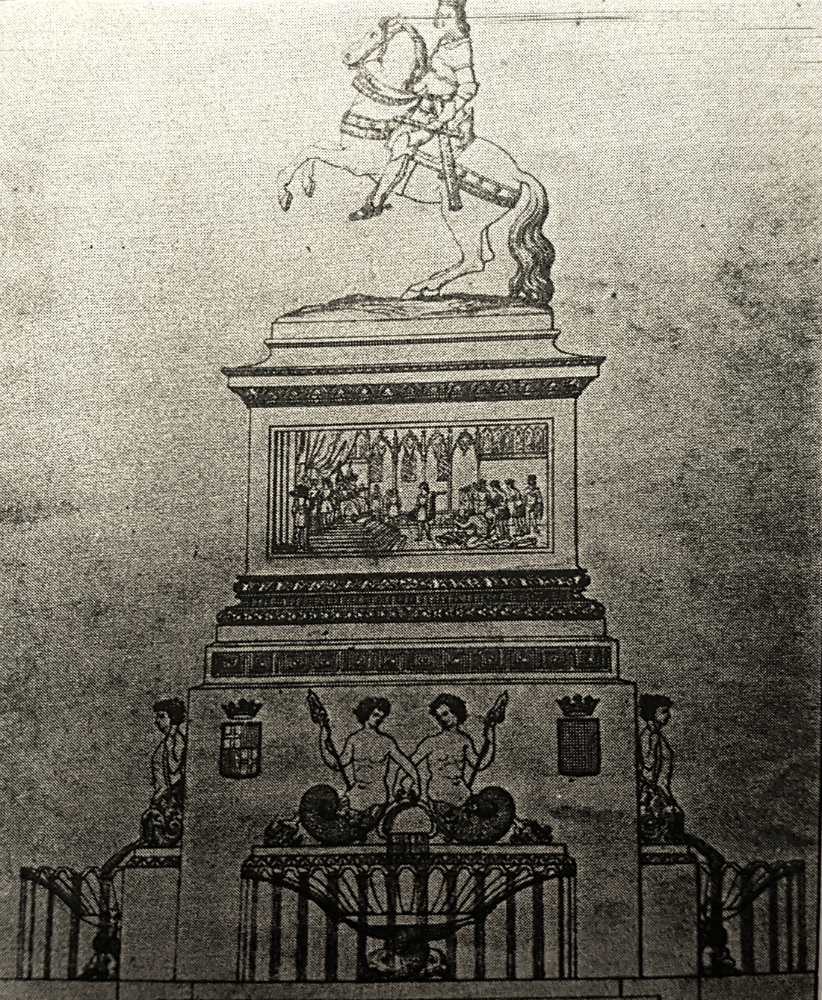 Monument project to “Ferran el Católic” to settle in the square centre. The original project of Francesc Daniel i Molina 1848.

Any cookies that may not be particularly necessary for the website to function and is used specifically to collect user personal data via analytics, ads, other embedded contents are termed as non-necessary cookies. It is mandatory to procure user consent prior to running these cookies on your website.