Barcelona history starts in Roman times, where the Gothic Quarter is placed today.
Starting and finishing at ArtiSa Coffee Shop, this route will guide you through the narrow and winding alleys and main roads of this neighborhood to the main tourist attraction and other hidden spots that you should not miss. 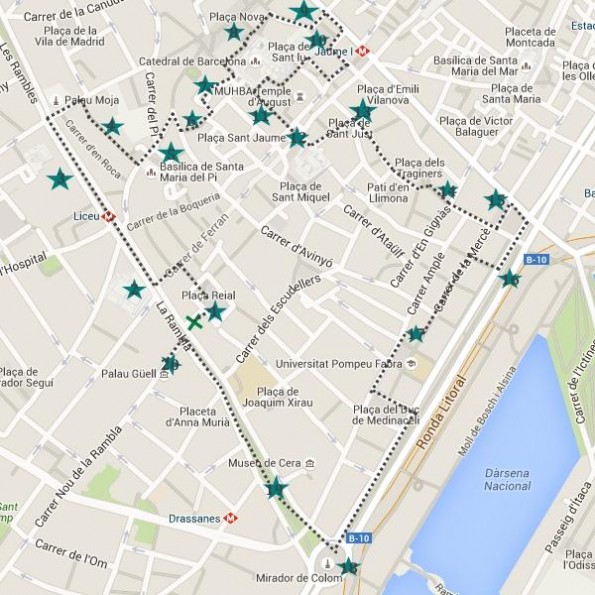 1. Plaça Reial: since the end of XIXth century it is one of the most vibrant squares in Barcelona. The “Tres Gracias” fountain was built instead of an equestrian statue in honor of king Fernando VII. On both sides of this fountain, there are two lanterns which were one of the first works of Gaudi.

2. El Liceu: this is the most prestigious and old theatre that still works in Barcelona, especially as an Opera house. First built in 1847, it suffered from fire two times (1861 and 1994) and one anarchist terrorist attack during its history. Guided visits are offered.

3. La Boqueria: the first and the most visited food markets in Barcelona. It was built in 1840 at the same place where ambulant meat sellers used to congregate since the XIIIth century.

4. Carrer Petritxol: this narrow street is one of the most well-known streets for chocolate makers in Barcelona. First opened in 1465, it is also the first only pedestrian streets in Barcelona since 1959.

5. Plaça I Esglesia del Pi: the church (1306-1391) is one of the best examples of the Religious Gothic Architecture. The square, named after a huge pine that was in the spot when it was built, houses a painters exposition during weekends. The pine that is in the square nowadays is a new one, the original was replaced.

6. Baixada de Santa Eulàlia: Taking from “Plaça del Pi” the narrow street “Carrer de la Palla”, turning first right on “Carrer de Banys Nous” and then first left, you will arrive to this narrow alley. Santa Eulalia is a Catholic and Orthodox Saint that lived in Barcelona in the IIIrd centrury BC. She was a girl of 13 years old who claimed for mercy for Christians to the Barcino’s emperor during the Christians prosecution (280-305 BC). Instead, she was martyrized with 13 very cruel tortures. In this alley she was thrown in a barrel full of nails down the street. On number 9, there is a sculpture of the saint with some verses from Jacint Verdaguer, a famous Catalan writer.

7. Sant Felipe Neri: Characterized by its baroque church with the same name, this romantic square has a very sad history. It was the church where Gaudi was heading to when he was run over by a train. Also, during the Spanish Civil War, a bomb blast here, killing 42 people most of them children that were hidden in the church. Evidence of the violent past can be seen in the pockmarked stone of the church.

8. The Cathedral: One of the most important buildings visited in Barcelona and the best Gothic Architecture example of the city. The interior is impressive and you can go up to the roof of the building using the elevator. Inside, the Crypt of Saint Eulalia is found. On the right, you may find the Cloister with 13 oaks remembering the 13 years and tortures that the Saint suffered.

9. The Roman city wall: The wall that surrounded “Barcino” in Roman times also surrounds the Gothic Quarter. In this spot, a great part of the old wall can still be appreciated.

10. Plaça del Rei: Presided by the stairs of the entrance of what used to be the Royal Palace of the Counts of Barcelona, this is a medieval square surrounded by great historical buildings. Columbus was greeted at this entrance by Kings Ferdinand and Isabel when he returned from his first voyage to the “New World”. Now the palace houses the History Museum of Barcelona.

11. Carrer del Bisbe: Following the back of the Cathedral you will arrive at this medieval street. The Neo-gothic style bridge that connects the House of Canonges, official residence of the president of the Generalitat de Catalunya (left), with the Catalonian government house (right), is one of the typical postcard views of the Gothic Quarter. Eventhough it seems part of the medieval history of the city, it was built at the beginning of the xxth Century by one of Gaudi’s pupils: Rubió i Bellver.

12. Plaça de Sant Jaume: This Square has always been an important place: During Roman times, two important main roads crossed. In 1931, the Republic was announced here. And in 1977 the former president Tarradellas announced his return from exile as a sign for the returned Catalan autonomy rights. Since then, it is the place where all main events are celebrated: political announcements, official events, popular festivals to sportive prizes of Football Club Barcelona. Also, it is the place where most of the popular manifestations start or take place. Nevertheless, in this square there are the Palace of Catalan Autonomy government (can be only visited on Sundays) and the Main Town Hall.

13. Plaça de Sant Just: Taking the street on the left of the Town Hall and turning left at the first crossing you will arrive at the square of Saint Just, the burial place of the city’s first Christian martyr. In the Middle Ages, this was the only part of the city where it was legal for Jews and Christian to trade together and there remains the mediaeval equivalent of the modern water cooler, a XIVth century fountain. The church was originally constructed by the Visigoths and it was used as a Cathedral while the present one was being built. In the inside, looking up from the wooden benches, you will see magnificent stained glass windows.

14. Plaça dels Traginers: The route continues through “Carrer del Lledò” (the street with more pedigree in Medieval times) and “Baixada de Viladecolls” (where best dagger were made from Roman until Medieval times). At the end of this street this square is found. It is here where a Roman defense Tower from the first Roman Wall of Barcino can be discovered.

15. Correos/Post Office: Heading the route to the East, you will arrive at the main Correos, the National Post Mail Company’s main building. Its impressive wide stairs of the entrance and its four Jonick style columns of the façade made this building of the beginning of the XXth Century an emblematic one for the city. Visit the interior and you will feel as you have been transported to the past.

16. Paseo Colom i Port Vell: This wide avenue in front of Correo’s façade lined with palm trees is Paseo Colom. It dates from 1878, when the sea wall of the city was demolished. It was the first attempt to connect the city with the old port (Port Vell) that can be seen across the avenue. At number 6 is the House of Cervantes, where the writer of “El Quijote” lodged during his stay in Barcelona.

17. Plaça i Esglèsia de la Mercé: Back to the interior of Gothic Quarter we find the Santa Maria de la Merce Basilic and its square. It was designed by the architect Josep Mas and completed in 1775. The façade is of particular interest as it is the only example of Barcelona baroque to combine a flat frontage and concave walls. Six years before the church’s centenary, the Pope gave his permission for La Mercè to be declared the city’s patron saint. For many years, the rector of the church tried unsuccessfully to have a block of houses located in front of the church demolished, in order to create a square that would show weddings held at the church in all their splendour. Following the restoration of democracy (1976), the district around La Mercè underwent significant urban redevelopment which led to the demolition of the block of houses in 1982, providing a new, wider space, and creating the present-day square. Opposite the church, you may find the Neptune Fountain, surrounded by holm oaks, which first stood in the harbor and later in Montjuic hill.

18. La estatua de Colón: It was constructed for the Barcelona’s Universal Exhibition in 1888 in honor to Columbus first voyage to the Americas reminding that he reported to Queen Isabella I and King Ferdinand V. It is said to depict Columbus pointing towards the New World. This, however, is not true, as the statue points south-southeast, pointing out to sea underscoring his achievements in naval exploration. The statue and sculptures surrounding depict scenes from the trip and other important persons related to Columbus. An elevator brings visitor to the top with outstanding views of the city.

19. Las Ramblas: The tour continues through the southern part of La Rambla (or “Las Ramblas” as locals call it). It is one of the landmarks of Barcelona, originally a river bed (“rambla” = Arab “sandy Boder”), marked up the western city limits on the XIV th century. A number of monasteries settled here later on becoming in the XVIIIth century a promenade. The Rambla is today, both for locals as well as for tourists, certainly the most popular promenade. It has five sections, each of them with its own character and its own story.

20. Palau Güell: Just a few steps from La Rambla, this luxurious palace is placed. This is one of the early works of Antoni Gaudi and one of the most magnificent buildings of the art nuveau. In 1885, Gaudí was assigned the task of designing a city palace by his patron, the industrial Eusebi Güelli i Bacigalupi, at this time one of the richest men in the world. It was inaugurated during the World Fair Exhibition in 1888, even if works went on beyond this date, and many social functions were hosted here. Built in stone coated with marble and decorated with hand carved wood and iron, it is a clear sign of Gaudi’s architectural style. The Palau Güell has been included to the list of World Heritage sites by the UNESCO since 1984

The length of this tour is 2.5km. or 1.50 miles and it will take you between 2 to 3 hours to complete, without stopping for visits to the main buildings. If you plan to do so, we recommend you book tickets in advance to avoid lonf queues for monument.
Do not forget to visit Art I Sa to provide your body and your brain with fuel before or/and after the tour.

Any cookies that may not be particularly necessary for the website to function and is used specifically to collect user personal data via analytics, ads, other embedded contents are termed as non-necessary cookies. It is mandatory to procure user consent prior to running these cookies on your website.